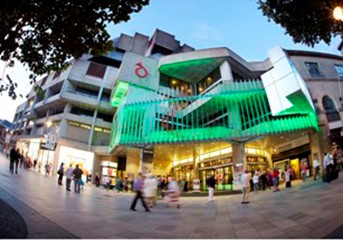 We love to see your Tweets and facebook comments and it's great that you want to tell people what a good time you're having. For the comfort of other audience members however, please restrict the use of mobile phone and internet devices to the interval or before and after the concert. All mobile phones and other devices should be switched off during the performance itself.

Situated in the heart of Cardiff, the capital city of Wales, St David's Hall is the National Concert Hall and Conference Centre of Wales. With its wide range of live entertainment, conferences, participation workshops, two bars and a Gin Lounge, helpful staff and relaxing surroundings, St David's Hall is a building to be enjoyed throughout the year.

For architects Seymour Harris Partnership, designing St David’s Hall was an unusual, if not unique, commission for several reasons. The primary challenge was how to provide a major 2,000-seat concert hall in the cramped space available and to complicate this issue, the building had to be fitted into an existing planned, and partly built, shopping centre.

The result was that, in an incredible five years from conception to completion, an impressive 2,000-seat concert hall, with arguably the best acoustics in Europe was built directly over the St David’s Centre shopping mall. In addition, the building has offices, comprehensive dressing rooms, meeting rooms and conference facilities.

The autumn of 1982 saw exciting days at the new St David’s Hall. The special ‘open day’ on 30 August 1982 attracted 21,000 people; nine days later came the first public concert, a free open rehearsal by the Polyphonic Choir. By the time the Queen Mother performed the official opening in February 1983, St David’s Hall had already transformed the artistic life of the Capital city. As Her Majesty said, ‘This exciting development will add greatly to the quality of life for the city of Cardiff and the people of the Principality.’

Cardiff, the capital of Wales, provides entertainment, sport, places to eat, leisure facilities, places of interest to visit and major events on a regular basis, attracting thousands of visitors each year. St David’s Hall continues to be a leading venue in the cultural and continuing development of Cardiff into one of the most cosmopolitan cities in Europe.

St David’s Hall is owned, managed and funded by Cardiff County Council with support from the Arts Council of Wales.