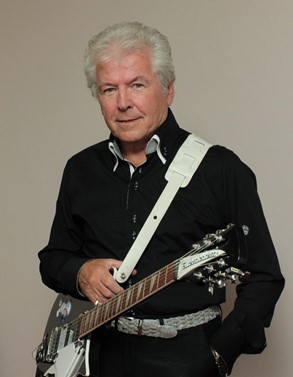 THE SENSATIONAL 60S EXPERIENCE is back at St David’s Hall on Wednesday 14 April 2021 with its best line-up yet for a three-hour extravaganza of pure nostalgia to celebrate the show’s 10th anniversary!

This year’s tour includes classic beat group The Fortunes, The Swinging Blue Jeans, The Fourmost and Meet The Beatles starring The Revolvers.

Top of the bill is Mike Pender MBE – the iconic frontman of Merseybeat favourites The Searchers – who is still belting out the hits having first reached No.1 way back in 1963!

Neil Collins chats to Mike Pender about his sensational career…

Are you looking forward to returning to Cardiff?

I think Cardiff is a fascinating city. We used to come down and do a week’s cabaret in a nightclub there in the early 60s. You would get the likes of ourselves, Brian Poole & The Tremeloes, The Hollies and a few other groups and we’d all do a tour of the UK; very similar to what we’re doing today. But of course we’re 50 years on now! Unfortunately, things change and people retire or pass on, so it’s not quite the same. But at least with me, there’s the original voice of The Searchers.

You could barely hear yourself over all the screams in the 60s, but now audiences sit and listen. They save their enthusiasm for the end, and it’s a fantastic feeling.

How did The Searchers get their name?

I went to see that John Wayne movie called The Searchers in 1957. I came out of the cinema with a few of the other guys, and I said “What a great name for a group – shall we call ourselves The Searchers?”

The following year 1958, I went to see Buddy Holly & The Crickets at the Philharmonic Hall in Liverpool.  I remember the date exactly – March 20 1958 – and for me, Buddy Holly started Merseybeat. In 1958, his music inspired a lot of young lads in Liverpool including The Beatles and ourselves.

We went on from there to The Star Club in Hamburg, gave up our jobs and took a chance because we hadn’t really had any records up until that point. There was no fame and fortune at all, but it was a fantastic place to go to – to go there and meet all the rock’n’roll stars like Jerry Lee Lewis, Chuck Berry and Bill Haley & The Comets.

We came back to the UK, and thought “What are we going to do now?” Then suddenly because The Beatles recorded Love Me Do, you had people like Tony Hatch coming up from London to see who else was in Liverpool. He came to The Iron Door Club where we were performing, liked us and said “I want to take you guys down to London”. It wasn’t long before we went down to Pye Studios and recorded Sweets for My Sweet and became an overnight success with our first record going to No.1!

You were still living with your parents in Bootle in 1963 when you discovered Sweets for My Sweet had reached No 1. Describe that moment – you must’ve been pinching yourself!

Absolutely, it all happened so fast! How lucky we were to be in the right place at the right time because that’s what it’s down to really. I know a lot of people who never made it to the top, but they still had lots of talent. So when I look back over the last 50 years, I really have been blessed.

We did a few gigs when I was still living at home, and had started to get adventurous and do shows outside Liverpool. I got home late one night and went to bed with my transistor radio and had Radio Luxembourg on. I remember the DJ going “…and No.1 this week is Sweets for My Sweet by The Searchers.” I couldn’t believe it!

Why did bands go over to Hamburg so much in the 60s?

It was a bit like The Cavern Club in Liverpool where all the big stars and emerging acts of the day used to play there. The Star Club was a magical place. I gave up a good job at a bookbinders printing firm in Liverpool just to go to Hamburg. But you take chances in life, and it certainly paid off for us!

The big stars played there, but we had to work until 3 and 4am doing three or four shows a night. It really took it out of you, but we were young lads – I couldn’t do it today!

People used to call The Cavern Club “The Sweat Cellar” because that was what it was. There was one way in and one way out, and if it was open today it definitely wouldn’t pass the fire regulations test. But it was the “in place” in Liverpool. They had lunchtime sessions when people in the offices would go in their lunch hours to see the groups. When I was working at the printing firm, I’d go to do a lunchtime session and get my friends to drop me onstage!

From 1963-65, you enjoyed incredible success with 3 UK No.1 singles and toured the States. What was that time like?

It was truly magical to have three No.1s in the space of about 12 months from Sweets for My Sweet to Don’t Throw Your Love Away to Needles & Pins. Those three records have stood the test of time, and they will out-live the group’s name. They will still be featured on compilations and on the radio long after we’re gone.

Needles & Pins is the song that really made us into household names in the 60s. It was our first gold record, our first million seller, it took us to America and onto The Ed Sullivan Show, which was the biggest TV programme in the US at the time. Elvis Presley and Buddy Holly had stood on that same stage only a couple of years before and it was like “Wow!” Even when I think of it now, the hairs stick up on the back of my neck.

In the early years the band shared vocal duties. How was it decided who sang what?

It was a bit like with The Eagles where people were wondering whether it could be the drummer or bassist who sang a certain song. We had three vocalists in Tony Jackson, Ed Curtis and myself. Tony Jackson sang Sweets for My Sweet, and I sang Needles & Pins.

As time went by, Tony Hatch our manager at Pye Records, said to me “You seem to be singing most of the songs, Mike” and it would quite often be me who sang songs live before we got to the studio. When we recorded Needles & Pins, we finished a take in the studio and Tony came in and said “Mike, why did you sing Needles & Pins-a?!” And I was like “I don’t know!” Maybe it’s because I come from Liverpool, and it’s a Northern thing where we add letters onto the end of words? Anyways, Tony said “It doesn’t matter because I like it”, so we left it in!

How did you develop that trademark jangly 12-string Rickenbacker sound that’s instantly recognisable as The Searchers?

When I went to see Buddy Holly in the late 50s, nobody had heard of Rickenbacker guitars. Then I saw John Lennon at The Star Club, and thought “that’s a funny name for a guitar”. It was German-sounding, so I took it upon myself to find out more and it was a German company, who went over to America and made guitars.

Today they’re one of the most famous guitar makers in America, and they make the best 12-string electric guitars. I got my first one in 1964. I used it for When You Walk in the Room, and I’ve been using one ever since.

If you had to choose, which would be your favourite Searchers song?

There’s a great song that I do in the show called Goodbye My Love. It was a big song and got to No.3, and I remember it being played on Juke Box Jury where they gave it five stars.

Love Potion No.9 is another one in the show.  Strangely, it wasn’t a single over here, but was a big hit in America and got to No.1…well, it actually got to No.2, but I tell everyone it got to No.1 because that was the biggest hit we ever had over there!

My favourite though is When You Walk in the Room, and it’s the one I close with. The audience are up clapping and singing along, and it’s got a great guitar riff. For me, it’s the best song we did.

In recent years you’ve released your memoirs, The Search for Myself. Was it an enjoyable experience?

I was inspired to write that when someone told me a book had been published by Frank Allen, who was still in The Searchers at the time. I remember thinking that I need to write one myself as there were a lot of things being said about the band that weren’t true and I wanted to get across what really happened.

I had a lot to write about after 50 years in the business having been around the world and met so many artists .I was searching for myself for a long time, and I did find myself in 1985 when I decided to go my own way with Mike Pender’s Searchers.

Performing in tours like Sensational 60s and talking to audiences is exactly where I’d want to be at this stage in my career. Hopefully, it can go on for another few years yet.