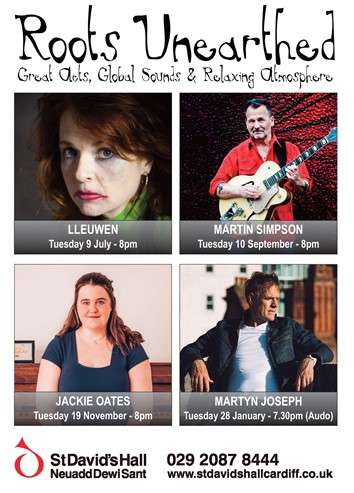 First up is charismatic singer-songwriter Lleuwen (Tuesday 9 July), who landed the prize for Best Original Welsh Language Song with Bendigeidfran at the inaugural Wales Folk Awards in April. Lleuwen was a member of jazz group Acoustique before receiving critical acclaim for her solo albums Duw A Ŵyr, Penmon and Tân. Twisting ancient hymns to her own compositions, Lleuwen’s latest recording Gwn Glân Beibl Budr (Clean Gun Dirty Bible) takes the Welsh hymn-book and throws it into the Age of Misinformation.  Live, raw and often improvised, Lleuwen is an inimitable tour-de-force.

Equally at home playing English traditional folk, American folk, blues and his own compositions, Martin Simpson (Tues 10 Sept) is one of the very finest fingerstyle guitar players in the world. Over 40 years after his debut album Golden Vanity, he remains a formidable talent whose every gig is a masterclass in love, sorrow, beauty and tragedy. Not one to shy away from any issue, Martin’s music transcends boundaries to make him one of the greatest storytellers in folk.

Staffordshire singer and fiddle player, Jackie Oates’ (Tues 19 Nov) name is synonymous with the reinvigoration of English folk music; beguiling audiences with a delicate balance of tradition and reinvention. Her mellifluous voice and imaginatively plaintive fiddle style has won several BBC Folk Awards during a 10-year recording career that began with The Unthanks and has continued with six solo albums. Jackie is also a member of The Imagined Village, and has collaborated with Alasdair Roberts, Belinda O’Hooley and her brother Jim Moray on everything from traditional ballads to eerie lullabies.

Unlike the above three Roots Unearthed concerts in the L3 Lounge, Martyn Joseph (Tues 28 Jan) will once again perform in the auditorium due to demand. The Celtic folk icon often referred to as the ‘Welsh Springsteen’ took home the gong for Best Original English Language Song with Here Come the Young at the Welsh Folk Awards. In 2018, Martyn was honoured with the Spirit of Folk Award by Folk Alliance International in Kansas, and also received Fatea magazine’s Lifetime Achievement Award.Gifted with the rare ability to speak to the soul, Martyn’s expressive and poignant lyrics over the last 30 years have amassed more than half a million record sales and thousands of live performances.

Experience all four of these leading lights of folk at St David’s Hall.

“Raw, rooted and radiant music”
From the Margins on Lleuwen

“Intelligent and enlightened songs are both energising and provocative…from subtle tenderness to growly indignation.  A Welsh national treasure” MOJO on Martyn Joseph

To book your seats, please visit:
https://www.stdavidshallcardiff.co.uk/whats-on/roots-unearthed/
or call the Box Office on 029 2087 8444.