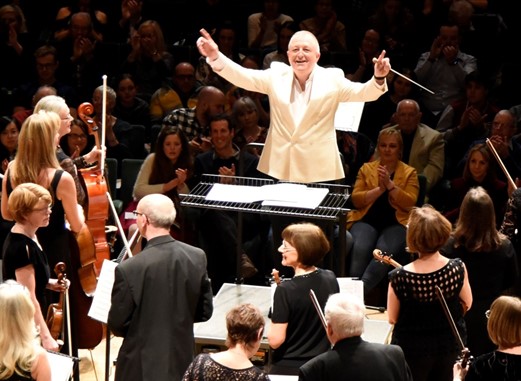 CARDIFF PHILHARMONIC ORCHESTRA celebrates its 40th Anniversary this month and will mark the occasion with a special anniversary concert at St David’s Hall on Friday 24 June.

Neil Collins speaks with CPO Conductor, Michael Bell MBE about his many fond memories performing with the orchestra over the last four decades.

After completing a degree at Cardiff University, you set up the orchestra in 1982 to continue performing. You must be pinching yourself that the orchestra is still here 40 years and almost 400 concerts later!

Absolutely! There was no opportunity to conduct after leaving university so I formed an orchestra and called it Cardiff Philharmonic Orchestra. I thought there would be one concert…and then after the success of the concert I thought…perhaps we’ll do one more…which has now become almost 400 one more times!

CPO will be celebrating this landmark with a special concert at St David’s Hall on Friday 24 June. What have you got in store for us?

We will begin by performing a brilliant piece of music by Welsh composer Gareth Wood, his Cardiff Bay Overture, which portrays the sights and sounds, the industrial and cultural heritage of Cardiff Bay – or Tiger Bay in its heyday as one of the world’s most important ports. This is followed by Gershwin’s jazzy and endlessly tuneful Piano Concerto. We have a fantastic young soloist, 22-year-old Italian pianist Gabriele Strata, who has stepped in at short notice after our original soloist withdrew because of illness.

The programme concludes with the most heartfelt and romantic symphonies of all, the Symphony No 2 by the Russian composer Sergei Rachmaninov – a work that the orchestra loves playing.

CPO’s inaugural concert was held at St David’s Cathedral on Saturday 19 June 1982. What are your memories of that performance?

I remember Rachmaninov’s Piano Concerto No 2 with soloist Richard McMahon being terrifying because the piano was situated on a different level to that of the orchestra. We couldn’t hear the piano and Richard couldn’t hear the orchestra…but somehow we got through it together! The main work was Mahler’s Symphony No 1, extremely ambitious for what was meant to be a one-off concert, but it was a very exciting experience for us all.

The orchestra started performing at St David’s Hall in 1983 where it continues to perform several concerts per season. It must feel like a second home to you!

CPO first performed at St David’s Hall in December 1983, as part of a charity concert, sharing the programme with other performers, including a very distinguished oboe player named Nicholas Daniel, who had won the 1980 BBC Young Musician of the Year Competition. At this concert, our timpanist fell ill and had to go home in the interval. Luckily, Nicholas Daniel had played timpani at some point in his life and stepped in to save the day!

What other venues CPO have performed in at home and abroad over the years?

I feel that St David’s Hall is the orchestra’s spiritual home, but we’ve played in a number of Welsh concert halls including Swansea’s Brangwyn Hall, the Gwyn Hall in Neath (my hometown!), Blackwood Miners’ Institute and Theatr Brycheiniog in Brecon.

The orchestra has performed in Europe, Zurich and Nantes, and most memorably twice in Paris at the Salle Pleyel, Paris’ premiere concert venue (our concert was sandwiched in between performances by the Berlin and Vienna Philharmonic Orchestras). We have also performed at the L'église de la Madeleine, the imposing Paris church where Faure’s Requiem was first performed; where Faure succeeded Saint-Saënsas Director of Music and where Franz Liszt performed a legendary organ recital. The place is steeped in musical history and the concert we performed there including Elgar’s Symphony No 1 was an unforgettable experience.

Over the last 40 years, CPO has joined by a huge array of special guests including Michael Sheen, Sir Bryn Terfel, Charlotte Church, Bonnie Tyler, Sir Karl Jenkins and even the likes of Neil Kinnock, Brian Blessed and Sebastian Coe. It must give you an enormous feeling of pride that such big names want to perform with the orchestra?

When you work with people famous from the television and in other public spheres there is always a tremendous anticipation. What will they be like? Will they be divas? But everyone with whom we’ve worked without exception has been a joy.

What are your memories of these collaborations?

We’ve been fortunate to perform with a wide range of distinguished soloists and presenters including the young Bryn Terfel (who rehearsed with us at Dalton Street Day Centre) and the great Sir Geraint Evans. Neil Kinnock narrated Jeff Wayne’s The War of the Worlds; Brian Blessed was a force of nature in Peter and the Wolf. I amended the script for him, naming the duck Gordon, so Brian could end the piece by bellowing his famous line “Gordon’s alive!”  Michael Sheen was our distinguished guest in the World Premiere of Mr Dahl in October 2016.

CPO has performed A Night at the Movies concert since 1994, and it’s now more popular than ever. The performance in December 2017 achieved the highest attendance at an orchestral concert at St David’s Hall for nearly 12 years! Do you still get butterflies performing in front of such a large audience? The thought of freezing onstage must be terrifying!

I always tell the orchestra that it doesn’t matter if we perform to a capacity house or a handful of people, we must be at the top of our game and that is what the orchestra does. Having said that, there is nothing like the thrill of performing to a full house.  As also in the Family Prom, it is great to see so many young people in the audience, many of whom may well have been attending their first concert. I’m always nervous before concerts, but it’s important never to let nerves gat the better of you and not to show it to the orchestra or the audience. Luckily, the nerves seem to vanish when we get underway.

As a big film fan yourself, it must be good fun performing such iconic music from the movies and sharing all the related facts and figures with the audience?

I’ve always loved from music from films and would be one of the sad people who sit right to the end of the film credits in the cinema to find out either who wrote the music, who arranged or orchestrated the music and also who performed the music. We started A Night at the Movies in 1994. Initially I wrote to Barry Norman to engage him to come and introduce the concert. When he sent me a very nice reply, but declining I thought I’d give it a go myself, so I have been introducing the concerts to audiences ever since. With the advent of the internet it became much easier to find facts, figures, and trivia than having to buy a succession of movie guides and reference books.

The first film score that made a real impact on me was that of Miklós Rózsa’s score for Ben-Hur (the film always seemed to be on at Christmas on one of the three channels then available!) We have performed music from Ben-Hur on several occasions and recorded it too, and I enjoy it immensely every time.

Since 2000, CPO has also performed the Family Prom at every year of the Welsh Proms. How important are concerts like these in introducing people to classical music from an early age?

I remember the thrill of hearing a live orchestra for the first time when I was in school and a group of us were taken to a concert at Swansea’s Brangwyn  Hall. After that I just wanted to keep going to concerts, and I did, and I hope that we can provide the same experience for our young audience at the Family Proms.

What can we expect from this year’s Family Prom on Sunday 10 July at St David’s Hall?

The theme of this year’s Family Prom is animals. We are performing pieces ranging from Elgar’s Wild Bears, a selection from The Lion King and the theme by John Williams to Jurassic Park. We will also perform one of the most beloved works written to introduce young people to an orchestra, Prokofiev’s Peter and the Wolf.

What have been your absolute favourite moments over the last 40 years?

There have been many memorable moments, some of which I’ve mentioned like the orchestra’s inaugural and first St David’s Hall concerts, and the unforgettable concert at L’Église de la Madeleine in Paris.

I am so proud to have been appointed an MBE in 2018 having been nominated by the orchestra itself.

CPO has always prided itself on delivering diverse and exciting repertoires. What pieces do you love performing? Conversely, are there any that are a bit of a nightmare to play?

I think that the fact we have always played a diverse range of music from symphonies by Mahler, Bruckner and Shostakovich on the one hand, to music  by Eric Coates and Arthur Sullivan on the other, is testament to the commitment of the players and the wish to play a wide variety of styles. There is no such thing as easy music. Everything requires dedication and care to give as good a performance as possible.

The orchestra has a loyal following that continues to return to your concerts year on year. It must be great seeing so many familiar faces and newcomers each season?

We are very lucky and we see familiar faces in our audiences time after time at our concerts. Many are friends and family members who require our particular thanks for understanding that Friday Night is CPO rehearsal night! New audience members are always welcome though and we hope that members of our audience who come to see a particular genre like film music will also give a chance for some of our more challenging repertoire.

One lady in the chorus told me subsequently that she had dragged along her 16-year-old son to the concert. Not only had he not heard Mahler’s Resurrection Symphony previously, he had never been to any orchestral concert and knew nothing about classical music. Rock and Heavy Metal was all he knew.

After the performance with great trepidation, his mum asked her son what he had thought of the concert, to which he replied just one word – “Awesome!”

After all these years you remain as committed and passionate for the orchestra as ever, which is reciprocated by your loyal and talented membership. What is the secret to CPO’s success?

Cardiff Philharmonic Orchestra has been my life for 40 years, and I am extremely proud of what we have achieved together. There are just four members of the orchestra here now who played in the inaugural concert – Jill Francis-Williams (the leader), Gill Edwards-Randle (cello), Lesley Clarke (clarinet), and Dai Williams (horn). Many, many others have played with the orchestra since that first concert in 1982. Some perhaps for one or two concerts, some for a few years while living in Cardiff, but there are others who have played and stayed, and have become the heart of the orchestra.

Their enthusiasm and commitment enables Cardiff Philharmonic Orchestra to rise to the challenge of performing diverse, popular and ambitious programmes to our audiences everywhere.

The above concessions are available on single tickets only.
Plus an optional £2 postage fee.

Rachmaninov
Symphony No 2 in E minor